What Game Creators Can Learn from Bob Ross 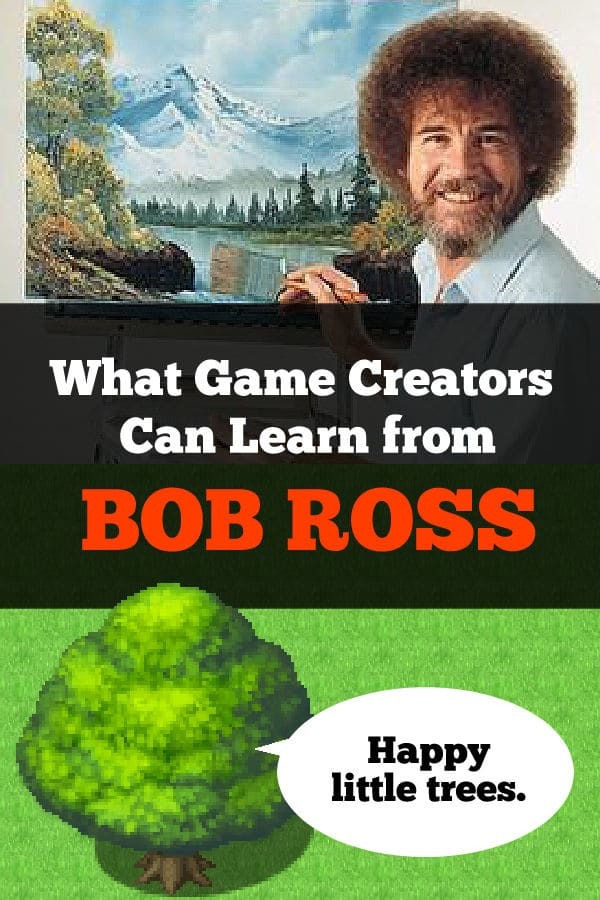 If you’re under the age of 30, you might never have heard of Bob Ross outside the realm of memes.

For the uninitiated, when I was a kid, in the late 80s and early 90s, a show called “The Joy of Painting” aired on PBS. It was a modest and minimalistic program, with a mild-mannered, soft spoken host who taught a method of painting that was attainable to the average person. His casual style and hand-holding approach, delivered with a style that felt as if he was speaking to you directly, gave the feeling of one-on-one instruction.

I know, I know, what does this have to do with gamemaking? Gimme a minute.

Regardless of your feelings about the style of art, or if you even care about painting at all, there are some key takeaways from his life and work that can be applied to game development.

If you know anything about Bob Ross, you probably know about his catchphrases.

Sometimes a mistake happened, even on camera. Did they edit it out? Nope. He took advantage of it. Mistakes were transformed with the casual ease of someone going with the flow.

Crooked tree branch? Don’t worry about it; cover it up with foliage instead.

Mistakes weren’t mistakes. They were opportunities.

Takeaway: Not everything will go as planned. When it doesn’t, do you have the flexibility to see opportunities instead?

What you study now is your inspiration later.

Mr. Ross’ career focused primarily on painting landscapes; the bright colors of his wet-on-wet technique became a vivid trademark. It seems the inspiration for these iconic landscapes came from his time as a first sergeant at the U.S. Air Force Clinic at Eielson Air Force Base in Alaska, which explains why distinct mountains factored into so many of his works.

Against the beautiful Alaskan backdrop, he was inspired to paint, and pursued it until painting was more lucrative than, well, military-ing.

But what if he’d never stopped to take in the view?

Takeaway: Keep your eyes constantly open, observing the world around you. You never know what might spark your next creative idea. Your ability to create a new world is partly reliant on what you know of your own world.

Your feelings permeate your work.

“I got a letter from somebody here a while back, and they said, “Bob, everything in your world seems to be happy.” That’s for sure. That’s why I paint. It’s because I can create the kind of world that I want, and I can make this world as happy as I want it. Shoot, if you want bad stuff, watch the news.”

Takeaway: You have power over another, highly interactive world…what sort of feelings will it give to those who experience it?

You have the ability to make hard things seem possible.

You may never be on TV. You may never paint anything. Heck, you may only put out a handful of short games and never even get nominated for a Misao.

But you did it. You did what other people don’t know how to do, or don’t dare to try. That’s what Bob Ross was about…making something that seemed complicated, attainable.

When he was struggling to learn to paint himself, his instructors at the Anchorage USO often would, in Ross’ words, “tell you what makes a tree, but they wouldn’t tell you how to paint a tree.” The rest of his career was an antidote to the wrongness of this, of overcomplicating a process that shouldn’t be complicated at all.

Takeaway: For someone else, your progress may serve as inspiration. Be inspiring and help others!

Bob Ross inspired a generation of 80s and 90s people to pick up their paintbrushes and fight their inner critic, to attack the canvas with gusto. It didn’t require anyone to know how to perfectly blend paint. You didn’t have to know exactly how to paint a tree with a fan brush. You just painted for the fun of it. For the joy of it. His work was great not because it was technically perfect but because it brought happiness to people.

Takeaway: Don’t wait to be perfect. Your projects have value, even if they’re flawed.

And finally, your contributions to others will outlast you.

His legacy lives on now, with thousands of Youtube fans watching his videos every day. People today still respond to his inviting instructional style, ongoing proof that people may not remember exactly what you do, but they definitely remember how you make them feel. The person who makes another person feel able, feel important, feel the freedom to express themselves, is the one who will be remembered.

They will be great, even in their imperfect glory.

Who inspires you, and who are you inspiring?

When People Hate My Work – How to Deal with Criticism

COMMENT RULES: We welcome your comments! We ask, however, that you do not post negative, hateful or unhelpful comments of any kind. In the interest of maintaining a helpful community, we will delete any comments that we feel do not contribute to a healthy creative atmosphere. Please be kind to each other and to staff and respect this rule.

We have articles, guides and free stuff designed to help even absolute beginners produce great work. Our emphasis is on RPGs and RPG Maker, but there's something here for users of all game engines. Join our party and learn with us!

Want to know how to make lighting and shadows for your RPG Maker MV maps?

Get the free PDF!

Want new game graphics as soon as we release 'em?  Drop your email in the box there and we'll get you some lovely new tiles as soon as they're available.

No-spam guarantee.  We won't give your email address to anyone else, period.  We only use it to let you know when we've updated with something you might like for your games.

Please log in again. The login page will open in a new tab. After logging in you can close it and return to this page.

Do NOT follow this link or you will be banned from the site!

Your cart is empty.