A Tale of Two Gamers
(and the stuff they made)

Gather round, kiddos, and I’ll tell you a story. It’s a story full of old-school games and cheat codes, magic and caffeinated beverages.  It’s a story of love and loss and…

Okay, okay, it’s about two dopey kids who like many dopey kids of the 1990s era, decided they wanted to make a game in the style of the games they love from their childhood.

Caffeine still applies.  (Come to think of it, so do the cheat codes.)

Let’s rewind the Magic VCR Tape to the 90s.

Ah, here we are, the 90s.  The SNES is still the bomb.  Cellphones didn’t do anything but call people. Pogs were all the rage.  Games like Chrono Trigger were brand new, inspiring a generation.

Two kids sit among this delightful madness, absorbing pale light emitted by a 12″ CRT TV.  Countless hours tick by as we play the classics.  Zelda: Link to the Past.  Donkey Kong Country.  Super Mario RPG.  Earthbound.  If we got stuck, well, there was Nintendo’s helpful hotline to call.

That was pre-GameFAQs days, baby.  You either figured it out yourself, bribed a friend to tell you, or called the hotline.  That’s the way it was back then.

We also rode dinosaurs to school.  Just saying.  It was awesome.

But back then, there weren’t many tools to make games.  We had a lot of ideas (never mind the fact that they were mostly ripoffs but hey, you have to start somewhere), and no way to execute them.  We had never heard of engines like RPG Maker.

So we turned to pencil and paper…

…for the time being, drawing characters who would often never make it to pixel form.  We wrote stories.  We drew little comics.  We made animated “movies” with a cartoon program that came bundled with some hardware we bought.  Without knowledge of programming, we explored these avenues of expression, trying closely to replicate the story formats we loved, but falling short in many ways.

The mediums were limited.  Really limited.  As limited as Windows 3.11.  (But, it was Windows for Workgroups, which I’m pretty sure is somehow better.  So there’s that.)

And then we got access to the World Wide Intarwebs, and that changed everything.

And so it began…

…with an engine called the OHRRPGCE.

That was around 1997. It still exists and is usable today. (It’s not my weapon of choice, but your call.)

A short time later, a beautifully hackneyed game appeared on the scene in all its 256-color palette glory…The Secret Orb!  This special gem treasure buried deep in the Cheese Dungeon featured a motley cast of princess, three talking cats, a couple of other characters that didn’t really do anything, and a girl with a horse’s head.  (No, I mean the head was attached to her shoulders.  She didn’t just carry it around, because, well, that’s weird.) 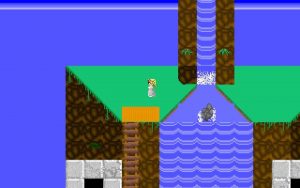 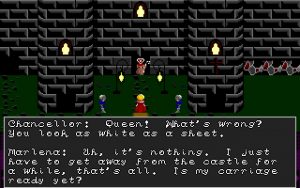 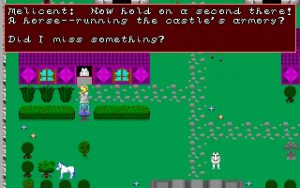 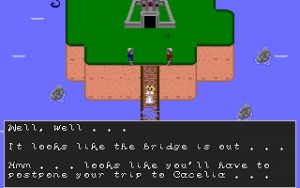 This game was so bad it was good again.  And we rejoiced.

Then our game-making died down a bit.

Just between you and me, that was for the best.

Then there were comics.

Somehow, we ended up drawing manga for a while.  But never mind that.  🙂

Then we started working on games again.

In 2009, development started on a couple of games, one of which was a shoot ’em up parody game.  Fun stuff!  This one didn’t get too far, and unfortunately, some of the files to run it have been lost.  But have some screenshots anyway. 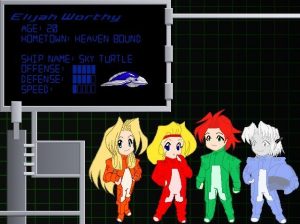 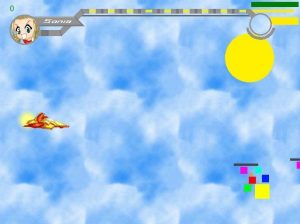 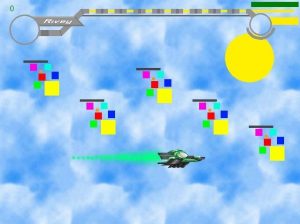 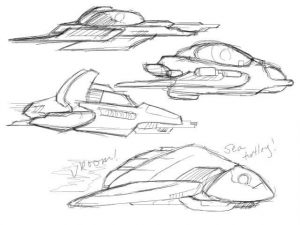 The other was an epic-scale sci-fi RPG that lost its sheen long before it was finished.  It was too ambitious a project for two people to complete before we (well, I) outgrew the story for it.  If I had it to do over again, I’d make a lot of changes.

Then came Seasons of Souls, one of T’s projects.  This one had some nice pixel art going for it. 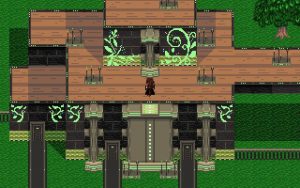 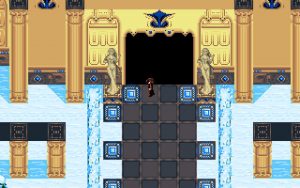 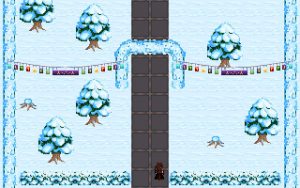 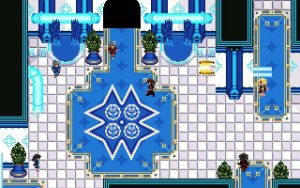 During this time, we became aware of RPG Maker.  I’d tried it out before, but for whatever reason, it didn’t quite click for me.  This time, I got a copy of it to work on the sci-fi RPG project (to make parallax-style maps more easily) but after that, I didn’t have much use for it.  The guilt of having it sitting around bothered me, because if I’m going to have a piece of software, I darn well better invent a whole project to justify having it.  So I did.

In addition, T made a revision of Seasons of Souls using it as well, although that isn’t publicly available.  We saw the potential of RPG Maker and dove into the free stuff available in the community.  We saw just how much awesome stuff they’re putting out.  How many games and resources people had contributed to the community.

We decided we wanted to contribute, too.  We’d gathered a lot of experience from all our failures and finally were ready to produce something of value…something that merged the charm of old-school gaming with the more professional storytelling styles in modern media.  We were ready to share what we’d spent the last twenty years learning.

We use cookies for our site and shopping cart to make your stay with us better! Is that ok?
Cookie settingsACCEPT
Manage consent

This website uses cookies to improve your experience while you navigate through the website. Out of these, the cookies that are categorized as necessary are stored on your browser as they are essential for the working of basic functionalities of the website. We also use third-party cookies that help us analyze and understand how you use this website. These cookies will be stored in your browser only with your consent. You also have the option to opt-out of these cookies. But opting out of some of these cookies may affect your browsing experience.
Necessary Always Enabled
Necessary cookies are absolutely essential for the website to function properly. This category only includes cookies that ensures basic functionalities and security features of the website. These cookies do not store any personal information.
Non-necessary
Any cookies that may not be particularly necessary for the website to function and is used specifically to collect user personal data via analytics, ads, other embedded contents are termed as non-necessary cookies. It is mandatory to procure user consent prior to running these cookies on your website.
SAVE & ACCEPT
Shopping cart
There are no products in the cart!
Continue shopping
0
[]

FREE Graphics for Your RPG

Yup!  Free graphics, no strings attached!  We'll even ship 'em to your email as soon as they're ready...no need to check our site for updates!

Some freebies are email exclusives - you won't see them on our website!

Our treasure chest of freebies is on its way!

If for some reason they don't arrive, let us know.